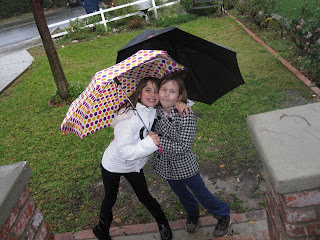 Emma (in her stylish houndstooth coat) and Lizzy don't see
what the fuss is about. Rain is awesome!
I have a few minutes between the rainstorms to get caught up. I’ve been telling stories about the wacky weather, but the thing I've been trying - and failing - to get across here is the disconnect between what's happening to us and what everybody's seeing on the news.

On the news, Joe McReporter from KCAL or KTLA or whatever stands in the rain in La Canada Flintridge, camera trained on a hillside, warning us of what might happen. In real life, we are in our houses with our kids and chores and pets, and it is raining outside. For a week.
On the news, Dallas Raines (the ultimate weatherman, I'm not joking. I love him) makes his predictions about how much it's gonna rain and for how long. In real life, I try to get my old dog Nathan outside to pee in between cloudbursts. Little dog Clem has taken the persistent rain outside as permission to use the bathroom floor instead of the doggy door, so I keep busy cleaning that up as well.
On the national news, they show the same three or four scary mudflow videos over and over again. Which leads to the real life problem of friends and loved ones calling from all over the country asking if we're okay. Which is great, of course; it's nice to be loved, but I kinda feel like I'm letting them down when I tell them things are fine here. Just wet.
On the news, the anchors report about the evacuations. The reporters track down residents to interview, and really enjoy talking to the (seemingly foolish) ones who aren't leaving. In real life, the kids' school gets cancelled, mainly because the cops don't want the traffic problems. My friend Becki lives up the hill, one street down from the evacuation line. For a while there, she thought she was going to get that knock on the door, the same night they decided to cancel school. And, as she put it, "I don't know which is worse: evacuating, or being stuck in the house all day with the kids."
That's real life for us. It’s not something I ever thought I’d have to worry about, growing up in Ohio and all.
Real life is doing the laundry while making a mental checklist of things to take with you if an emergency arises. It’s helping with homework and making dinner, while watching three police cruisers tear up the street and wondering if that means the mountain gave way somewhere. It's trying to explain to my daughter that she can't have a sleepover, because maybe her friend's house will need to be evacuated overnight. We just don't know. We’re winging it here.
So the rain has stopped for now and the sun is shining. The reporters are gone from the neighborhood, off to cover the snow in Big Bear. The kids went back to school, and the little dog is using the doggy door again (yay). Another storm should be rolling in tomorrow. Now, like we did during the Station Fire, we watch and wait. Because when your real life is about dealing with some of the weirdest situations Mother Nature can throw at you, that's all you can do.
That, and laundry. There’s always laundry.


Amazing video of mudslide up on Canyonside Drive, about 2 miles from us.

This was taken on January 18th and got plenty of airtime on the news networks.

This morning, as I walked out to the mom van to run an errand at the school, two L.A. County Sheriff's cruisers went zooming up the street in front of me. 9:00, I realized: time to start the evacuations. Being a nosy parker, I went looking for them after I was done; sure enough, there they were on Pine Glen, one of those streets I was talking about yesterday. On one side are homes, on the other side the sheer face of a saturated hillside threatening to surrender to gravity.

Three cruisers were parked on the side of the street and I saw two officers walking up to two different houses, clipboards in their hands. If residents refused to evacuate, they had to sign documents to that effect. These evacuations are serious. If you're popped from your home, you're popped until Monday. Unlike the fires, the mudslides are impossible to predict and you can't just put 'em out. And as you can see in the video up there, it's not just mud, either. There can be some pretty big rocks coming your way.


I had found the list of addresses being evacuated last night on the818now.com, and ran into the bedroom to tell Dan. "Holy smokes! These are right up the street!" One mile up the hill. Doesn't sound like much, but it's a pretty long way for mud to travel, so my concern was for my old neighbors and other families I know.

Then at 10:30 the phone rang. It was a robocall from the elementary school, assuring us that school would be in session in spite of the evacuations. 5 minutes later we got the same call from the middle school. We want to provide the children with a stable environment during this difficult time, they said, and we know our community will pull together to support those families affected by the evacuations.

There's a low, gloomy feeling of unease around here. I keep comparing it to the hurricanes in Florida: you know they're coming, but you don't know what the damage is gonna be. It's about 11 a.m. as I write this, and the next wave should be arriving in an hour or so. The weather dudes are saying this will be the biggest one, and we may get up to 7 inches of rain today. Today! In one day! And it's going to be really bad when school is letting out, too.

And me without any rain boots. Stay tuned...

There are a lot of things about California that compel the rest of the country to think "why would anyone even want to live there?" Earthquakes, of course, top the list. Growing up in Ohio, I was one of those people. That's just nuts, I thought, why would you choose to live somewhere like that?


Now that I'm a resident – and completely dug in (that's another post for another day) – the crazy things about my home state keep piling up. The state budget, for example, has gone haywire. No wonder; we require a two-thirds vote to pass a budget, which is ridiculous in this partisan society. I don't think our legislature would pass a resolution saying "puppies are cute" with a two-thirds majority.


Smog was one of my big concerns when I got here. I chose the Foothills as a place to live, because I thought the air would be fresh and clean up high and away from the city. Not so. Apparently La Crescenta's nickname – "The Balcony of Southern California!" – came because all the icky air floats around merrily before looking for a place to land, and what better place than an outdoor balcony?

Then there's that whole fire business, which I've covered in a previous post. And now I'm smack dab in the middle of the consequences of the Station Fire: mudslides.

Yes, now the earth is giving way. Not by shaking, but by erosion. There are no trees left to keep it in place, and the rain is going to pummel it for the next several days. Folks around here are dealing with this prospect in different ways.


My neighbor is prepared to evacuate.  She has her bird's travel cage ready to go, computer backups on the table. She has checked the projections for "fluvial flow" and knows that in a worst-case scenario, the mud would travel down our main street and expand outward as it heads downhill. "We'll be ready to get on the roof," she says, "because if it comes, it comes really fast." Keep in mind that we are more than a mile down the hill, and there are hundreds of homes between us and the mountain; but I have to say, I've learned a lot about preparedness from her. Because who the hell knows? This is not something they prepare you for in school.


This morning after I dropped the girls off at school, I drove up the hill to see what had happened in yesterday's rain. There was muddy residue along the side of the road as I drove up. At the top of the neighborhood, where houses face a bare mountainside across the street, there were crews cleaning up a small landslide and reinforcing the area. I could see a few narrow ravines where the water had started to work its way down and into the mud.

Overall, though, it wasn't bad. I was encouraged by the presence of the road crew. Our street was clear, assisted by wide flood channels. I drove home, clear skies above, wondering what would happen later today when the next round started.


Officials are expecting the heaviest flows tomorrow and Thursday. The local television reporters are just apoplectic over the potential for disaster. I watched as an LA County Sheriff drove up to a KTLA reporter during a live report and told her to move farther down the hill. She was just about pissing herself with excitement. It reminds me of the reporters in Florida during a hurricane.

All of this challenges me to keep my chipper attitude. I mean, really, what are you gonna do? It's where I live, for better or worse. And there are plenty of good things about living in California, believe me.


I'm just having a little trouble remembering them right now. And I'm keeping my laptop and the baby pictures near the door. 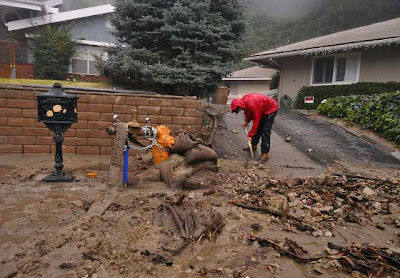 One of the worst flows this round was just to the east of us in La Canada.

Posted by Leanne Levine at 9:22 AM No comments:

I usually listen to NPR in the car when the kids are all hooked up to their various devices: Nintendo DSes, iPods, even the occasional book. But as we drive back from Emma’s dermatologist appointment (plantar wart on her foot), my favorite station, KPCC, is on and she is listening.


“This is All Things Considered, I’m Michelle Norris…”

“Robert Seagull,” says Emma. “His name is Robert Seagull.” She finds this just hilarious and starts to giggle. “Robert Seagull is talking. He’s a talking seagull.” Claire snorts with laughter too.

“Yeah he can, he’s a talking seagull. I’m Robert Seagull, squawk, squawk!” They are dissolving in peals of laughter. “Watch out for the seagull poop!”

Meanwhile, Robert Siegel has started reporting about a story from Iran. Over the laughter, Emma hears a woman speaking a foreign language on the radio.

“I’m Robert Seagull, and now here is a woman speaking Spanish,” she says in her broadcaster’s voice.

“FARTSY? Did you say FARTSY?” she screams. The giggles are ridiculous now.

“Farsi. That’s the language they speak in Iran,” I say, to utterly no avail.

“You said Fartsy! Ha haaaa!” They are both giggling now, squealing about seagulls speaking Fartsy language. By this time I am also laughing so hard that tears are squeezing out of the corners of my eyes.

Just another day in the minivan.

Posted by Leanne Levine at 4:44 PM No comments: