Because I was lucky to have her at all

My best friend Karen Dunaitis has been gone for five years and one day. She had breast cancer, and she died.

Karen was a lot of things to me, but I don't think she ever knew what an inspiration she was. She always nudged me to try new things, to think creatively, and most of all to seize every minute of joy and fun that life gives you. Sometimes she was the devil on my shoulder, other times the angel who wrapped me in her arms and let me cry. I loved her like a sister, and I don't think I'll ever know anyone quite as luminous and free-spirited again.

Because I was lucky enough to have her at all, I've decided to go way out on a limb here, and share something from the little book I'm working on. This is one of my favorite memories. For those who don't know the backstory, we met when Disney opened their animation studio in Orlando in 1989. Her husband Aaron and my future husband Alex (now my ex) both worked there.

I was still waiting tables at the fancy-pants Hyatt resort near Disney World and finishing up my art degree in the early years at the studio, and then my first job was late shift paste-up at a printing company, so I often had time during the day to drive out to Kissimmee and hang out with Karen. We had a few essential background things in common which cemented the foundation of friendship. One: we were both Midwestern girls who found ourselves living in Central Florida. Karen had bolted for the beach as soon as she got out of high school in Ann Arbor. Two: we were both art majors. She had studied art at Ringling, where she met Aaron, and was a talented stained-glass artist. Three: we liked the same music. Four: we had both spent years waiting tables, or in Karen’s case, cocktailing. Five, and probably related to Four: we liked to party. And of course, there was the whole animation thing, which our men had in common.
I felt ridiculously comfortable around her. Waiting tables, you have to put on this act for your whole shift, especially in an upscale Italian restaurant in a hotel full of stuffy (and often foreign) tourists. The acting is almost more exhausting than the schlepping of tableside Caesar salads. Karen was home all day with her two little ones and welcomed my company. We would drink Diet Cokes and play rockabilly or Tom Petty and just slide into each other’s company like old flip-flops.
The house was small, but the yard made up for it. Sunny and spacious, thick with coarse St. Augustine grass and no landscaping to speak of, but it didn’t matter because your focus always went to the dock down by the creek. There wasn’t a boat there, just the canoe dragged up on the grass next to it. But the dock was the thing that drew you in, and you could see why they didn’t care that the house was little more than a firmly planted double-wide.
All along the creek, the trees grew up and over like so many old aunts and uncles with outstretched arms, welcoming the water and the people traveling on it. Karen and I would sit down there on old Adirondack chairs listening to it run, watching Austin and Dustin splash in a wading pool or ride their Little Tikes cars through the grass. They had white-blond hair and their brown eyes were huge and round like anime characters.
Karen was a natural mom. I don’t just mean she made it look easy, I mean she was an earth mama before I knew what that meant. If the kids’ feet weren’t filthy at bath time, it hadn’t been a good day. When they fell she didn’t run to them in a panic. Her voice stayed calm and consequently so did they, almost all the time. I seldom heard her talk baby-talk, but she made them laugh and called them silly names, and was quick with kisses and I love yous. She taught the kids who their friends were and so they were always comfortable around me, and their hugs were my adrenaline. Dustin was shy, but Austin was a clever thing from the start, with a truly impish glint in her eyes. I adored her.
One time I was there, Austin couldn’t have been quite three, and there was an issue of Rolling Stone magazine on the dining room table. It was a “year in review” issue, and had a mashup of photos of the year’s newsmakers on the cover.
Austin eyed me closely; I wore my hair very short then. She pointed at a photo on the cover and said, “That looks like you.”
It was Billy Corgan of the Smashing Pumpkins. Back when he had hair, of course. Karen raised her eyebrows and busted out laughing.
“Bu-but that’s a boy, Austin,” I said, pouting.
She gave me that winky grin and ran off.
“A very pretty boy, though,” said Karen. 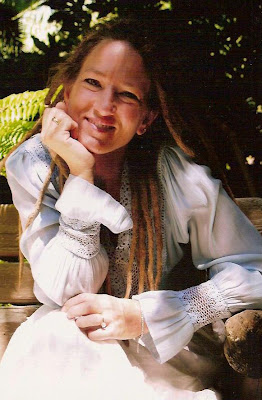 I love you and miss you, Karen. You inspire me still. Thanks for everything you gave me, and all of us. You were one swell broad.
Posted by Leanne Levine at 5:49 PM 4 comments: