I’m finally putting Christmas away, and it’s organization OCD to the max. Since it was our first holiday season in the new, larger house, I decided we needed more décor items, and now I have to store them somewhere. Thus the compulsive examination of every item, old and new, and the clean, color-coded new plastic boxes to put them in.

Already I have thrown out old stockings, wasted lights, cardboard containers and some glass ornaments from my “peach-and-lace only” tree that I had when I was 25. Seriously, peach glass ornaments that have followed me around for 24 years, and I stopped liking them about 23 years ago. Curse that old Midwestern thriftiness. “Those are perfectly good ornaments, you may want to use them someday.” Sheesh.

The Hallmark ornaments are tucked away neatly in their individual boxes. I’ve been collecting them since the early 90s, and now have enough to decorate a tall, narrow fake tree (which has followed me around for about 14 years now). Each ornament has a special note saying why I chose it, or which child it was for, or later which child helped me choose it, which of course I had to read. Again. Not an efficient use of time.

This year, I was determined to come up with a super-Christmassy activity to do with the kids, since they outgrew the mall Santa long ago.  So I took them to a little candy store in Ontario, California, where they make candy canes by hand and do demos you can watch. It was a 40-minute drive through Pasadena traffic at rush hour, but it seemed like a fun thing to do – “remember that time we watched them make candy canes?” – but the truth is, I was doing it for me. I had an ulterior motive.

When I was growing up in Ohio, we would drive to my dad’s brother’s house in Cleveland for a family holiday gathering. Uncle Ron and Aunt Dot would put folding tables with paper tablecloths down in the finished basement, as the house filled with the smells of the coming feast: turkey and gravy, potatoes and pies. We kids watched Christmas shows in the living room and tried to keep our hands off their big Hammond console organ. This was no wimpy 61-key organ. It was practically an orchestra, with rows of keys and buttons for rhythms and drums and horns. No way a kid could resist.

Sometimes my brother Bob and I, along with cousins Lee and Rob and Cheri, were allowed to trek through the snow to the corner store, where we would (honestly, this is how old I am) look at Archie comics and penny candy. But I never bought any candy because Ron & Dot always had something I treasured: fancy glass dishes full of ribbon candy, peppermint, cinnamon, cherry and clove. Clove was my favorite. Delicate swirls of shiny striped deliciousness that, if you let it melt in your mouth, would turn into candyfloss strings of pulled sugar, like no other candy in the world.

When I was about to enter 6th grade, Dad moved us to Orlando, and the Cleveland Christmases ended. Although we moved back to Cincinnati two years later, I don’t remember if we ever went to Cleveland for Christmas again. It just wasn't the same.

My dad doesn’t even remember the ribbon candy at his brother’s house. When I tell people about my passion for the stuff, they usually look at me like I’d expressed a love for laxatives or anchovies. “I don’t know,” said my friend Kevin. “It just makes me think of old ladies.”

But my memories of ribbon candy have stayed with me. It came to represent everything good and glowing about the holiday season. A couple of years ago, I found some boxed ribbon candy. I took some home, but it was too thick, and stale, not like the ribbon candy I remembered. Eventually I came to believe that nobody was even making it anymore.

And then, while googling “fun things to do at Christmas”, I found Logan’s Candies, an old-fashioned mom-and-pop candy store where the goodies were truly handmade. I went to their website and saw the schedule for candy cane demonstrations. Hmmm, that sounds like fun. And then I looked up at the site’s menu and couldn’t believe it: they made ribbon candy! By hand! The photo showed the shiny waves of striped deliciousness from the glass candy dish in my memory. And the flavors! Watermelon, Sugar Plum, Cotton Candy, Root Beer, Green Apple, Butterscotch, so many more! Peppermint, Cinnamon… and last there on the list:

I had to go. Had to. Our first year in the new old house, my kids older and needing some new traditions with our blended family and lack of grandparents and Uncle Rons to forge their Christmas memories. Had to go.

We arrived at our destination in time for the last demo at 8:30. A crowd jammed into the tiny store to watch Jerry Rowley, the owner, massage and manipulate a huge blob of warm, white candy. He cracked jokes while his hands moved deftly to add the color and flavor and stretch it into long ropes. “As you can see, I cut the candy,” he said, “which makes me the candy cutter.” He passed the red and white sticks to his daughter, saying “she rolls the candy, which makes her the candy..." and he paused before saying, "...roller!” The candy was then passed to his wife, Susi, who formed it into the traditional candy cane shape. “And my wife, as you can see, bends the candy into hooks, which makes her the candy…" a mischievous pause, then, "... bender!” Ba-dum-bump.

As the demo went on, I sidled up to a young lady working the register. I did not see any of my precious booty anywhere and feared the worst. “So, um… do you have any ribbon candy left?”

Hooray! “Do you have any clove?”

“No, I’m sorry, just peppermint and cinnamon. I think she only does the clove in the fall. Do you want to get some anyway?”

She boxed up two long pieces of each flavor and I got a handmade candy cane for everyone in the family. The kids were ready to go, having snagged some free samples. But before leaving the warmth of the store, I opened the box to look, and there it was. Handmade, fragile, glossy: just like I remembered. And I got tears in my eyes. I really did. Claire, my youngest, asked if I was okay.

The ribbon candy lasted through the holidays. I would look at it in its little dish, then break off a swirl, so delicate it would shatter at the ends, and let it dissolve slowly on my tongue, as I drifted back to a living room in Cleveland where I begged Aunt Dot to let me play the organ. 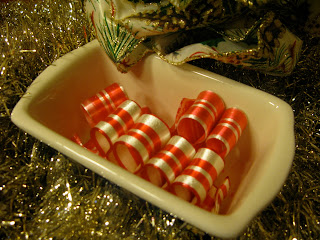 Post script, December 2013: last year (2012) I ordered a whole pound of ribbon candy - including my beloved clove flavor - over the phone, and had it shipped to my house. This year, Dan & I made the drive and I loaded up once again. They were sold out of clove, unfortunately. But I'm starting to get a real thing for cinnamon.