On that sunny morning, life was lovely. My husband drove our beautiful 4-year-old son to his preschool on the way to work, and I stayed home with our baby girl. She had celebrated her first birthday just 5 days before. I took a load of laundry out of the dryer and brought it to the living room, where Emma played with her toys and I folded baby clothes as the Today Show hummed along in the background.

I don't want to remember, because when I do, I get that feeling in my gut again, a feeling I had never experienced until that day, a feeling I just can't put a name to. It was horror, uncertainty, fear, anger, dread and disbelief all wrapped in the most crushing sadness, like acid in my belly, denying me my breath. Most of the day I don't remember, moving through the chores and routines, holding onto my children, both mercifully too young to understand what had happened. That night, though, after they were asleep, I went out driving alone, just me and the unbearable feeling in my gut. I ended up at my parents' church with other people who, like me, didn't know what else to do. And it didn't matter that I wasn't religious. It was all I could do.

Now it is ten years later. All over the media there are remembrances, tributes and tales. Americans will fly flags and say "never forget" – as if that were even possible – and this is how I feel:

I want none of it.

Because I'm not just an American. I am a member of the human race. And that day, a great hole was torn through the cosmic fabric that holds us together, the result of a willful act of hatred by one group of humans against another. A gash rimmed with blood, full of the screams of the dead and the wounded and their families and, truly, every one of us. All of humanity was changed – not just Americans – deeply and forever, when hatred drove those planes into the towers.

When I look back over the last ten years, I know that we, as humans, have failed miserably at mending that hole. If anything, it has grown larger, more ragged and bloody. The hatred has oozed into our media, our politics, our religion. We have gone backwards.

So on this anniversary -- a word I hesitate to use, because it should celebrate happy events, not this -- on this day, I don't want to watch the remembrances, the tributes, the tales. I do not want to replay the images in my mind. Because everything changed forever that day. We lost our innocence. It sent my husband, a former New Yorker, into a depression that lasted years. The acid ate away at me, at my self-confidence and faith in the future. Ultimately, our marriage did not survive. That is hard enough to accept, much less reliving the catalyst for it all.

Ten years later, I will sit on my back porch and close my eyes and try not to remember, because that acid in my gut is still a feeling I don't know what to do with. But I know I'll fail, and I know I'll cry, because what I will remember is how things were at 8:45 that day, when I sat on the couch folding onesies, and my baby girl stacked her toy blocks and squealed with pure, simple happiness. And I'll pray, such as I do, that someday the hole can be mended and the healing will actually start.

No Less than the Trees and Stars 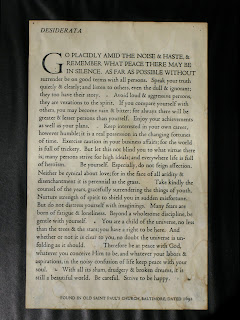 I've had this copy of the Desiderata for about thirty years. That's my best guess. I think I got it in high school, or early on in my college career at Ohio University. It's just a photocopy, and it's littered with thumbtack holes and coffee stains; recently I put it in a frame to keep it protected.
The word "Desiderata" is the plural of the Latin word "desideratum", which means "desired thing". It's a common myth that it was written in the 1600s. I believed that for years. After all, my copy says "Old Saint Paul's Church, Baltimore A.D. 1692". In truth, the poem was written in the 1920s by an American poet named Max Ehrmann (who, like many of my favorite people, was from Indiana). Here's a summary of its confusing history (courtesy of fleurdelis.com):

Around 1959, the Rev. Frederick Kates, the rector of St. Paul's Church in Baltimore, Maryland, used the poem in a collection of devotional materials he compiled for his congregation. At the top of the handout was the notation, "Old St. Paul's Church, Baltimore A.C. 1692." The church was founded in 1692.


As the material was handed from one friend to another, the authorship became clouded. Copies with the "Old St. Paul's Church" notation were printed and distributed liberally in the years that followed. It is perhaps understandable that a later publisher would interpret this notation as meaning that the poem itself was found in Old St. Paul's Church, dated 1692. This notation no doubt added to the charm and historic appeal of the poem, despite the fact that the actual language in the poem suggests a more modern origin.


When Adlai Stevenson died in 1965, a guest in his home found a copy of Desiderata near his bedside and discovered that Stevenson had planned to use it in his Christmas cards. The publicity that followed gave widespread fame to the poem as well as the mistaken relationship to St. Paul's Church.

The flower children in San Francisco revived it as part of the peace and love movement. Those of my generation may remember the spoken word recording by Les Crane, which reached #8 on the Billboard charts in 1971.
For me, the sentiment behind the poem articulates the way I wish to live my life. It features concepts that align with all major religious doctrines. So I felt like sharing with you, dear readers. Feel free to leave your thoughts in the comment section... which lines resonate with you?
Go placidly amid the noise and haste,
and remember what peace there may be in silence.
As far as possible without surrender
be on good terms with all persons.
Speak your truth quietly and clearly;
and listen to others,
even the dull and the ignorant;
they too have their story.
Avoid loud and aggressive persons,
they are vexations to the spirit.
If you compare yourself with others,
you may become vain or bitter;
for always there will be greater and lesser persons than yourself.
Enjoy your achievements as well as your plans.
Keep interested in your own career, however humble;
it is a real possession in the changing fortunes of time.
Exercise caution in your business affairs;
for the world is full of trickery.
But let this not blind you to what virtue there is;
many persons strive for high ideals;
and everywhere life is full of heroism.
Be yourself.
Especially, do not feign affection.
Neither be cynical about love;
for in the face of all aridity and disenchantment
it is as perennial as the grass.
Take kindly the counsel of the years,
gracefully surrendering the things of youth.
Nurture strength of spirit to shield you in sudden misfortune.
But do not distress yourself with dark imaginings.
Many fears are born of fatigue and loneliness.
Beyond a wholesome discipline,
be gentle with yourself.
You are a child of the universe,
no less than the trees and the stars;
you have a right to be here.
And whether or not it is clear to you,
no doubt the universe is unfolding as it should.
Therefore be at peace with God,
whatever you conceive Him to be,
and whatever your labors and aspirations,
in the noisy confusion of life keep peace with your soul.
With all its sham, drudgery, and broken dreams,
it is still a beautiful world.
Be careful.
Strive to be happy.
Posted by Leanne Levine at 10:00 AM 6 comments: