In Praise of the Old Dog

Once upon a time, there was a woman who wanted to have a baby. This proved to be a difficult thing, and when the doctors told her they couldn’t figure it out, she said to her husband:

So with the same fervor she had once reserved for studying fertility books, she set about researching dog breeds. They wanted a big dog – her husband wanted a Boxer – but they had a small yard. One day, as she pored over her dog books, the little Corgi caught her eye.

But not the Pembroke Welsh Corgi, the more popular tan-and-white fluffball with no tail, the Queen’s dog of choice. No, she noticed the lesser-known Cardigan Welsh Corgi: larger than the Pembroke, in more colors, and sporting a splendid brush of a tail. Hm, she thought, this is a dog who thinks he is big, but has little stubby legs. Just right for our yard.

There happened to be a Cardigan breeder in a nearby town, so the man and the woman went out for a visit. As soon as she saw the sweet smiley-faced big-eared dogs, she was in love. And so, not too much later, they found themselves matched up with a little brindle boy of their very own.

They named him Nathan Junior, after her favorite movie, Raising Arizona. Nathan Junior is the name of the baby stolen by Hi and Ed when they could not have one of their own. So the name was ripe with meaning.

They loved their little Nathan Junior. He was sweet and happy and made them laugh. He came with them to parties, and their friends fawned over him, because he just had something special. People had never seen a dog quite like him: a long stout body, but with short legs and big feet, giant bat-ears crowning his head, and that thick sweep of a tail. Nathan was a show-quality dog, brindle-brown with a white ruff and beautiful symmetrical markings on his face. But they didn’t show him; he was their devoted pet.

The woman was very happy with her new companion. And then – when Nathan was just about to graduate from puppy kindergarten – she found out she was pregnant.

Now fast forward 14 years. Nathan has been by her side through not just one but three babies, all of whom he treated with patience and love. Nathan moved with the family to California, where after a time the woman and her husband divorced, and his unfaltering devotion and happy doggy smile helped her and the kids get through it. He was loved, inexplicably and for all her life, by a black cat named Alabama, until she died last August. He now has a vivacious two-year-old rescue mutt named Clementine as his constant companion.

Nathan is old now. He's hard of hearing and has cataracts. He barks a little too loudly, as if to say, “I’m still here… right?” The beautiful symmetrical markings on his face are spotted with grey hairs. The damp, leathery surface of his nose has spots that are hardened and dry.

Recently he has developed a pronounced head-tilt, which the vet says is a sign of neurological damage: maybe a stroke, a tumor, or just old age. He looks at the woman with his head cocked to almost 90 degrees. Sometimes his tongue lolls out of the side of his mouth. He can’t always get those stubby back legs underneath him without help, so sometimes he pulls himself around with his front legs, cheerfully, like it’s no big deal that he's dragging his butt. He still asks to go outside and can walk, with help, to do his business.

Now that he’s old, he sleeps a lot, but always in the room she is in. If she leaves the room for more than a few minutes, he struggles to his feet to find her. “Oh Nathan,” she coos, “you’re my little shadow. Come on, let’s go lie down in here,” and she strokes his graying hair and kisses his big ears.

The woman doesn’t know how many more days or weeks or months she will be able to look up from her writing and see him snoozing across the room. She cares for him as if he’s a beloved grandpa in hospice care. She spends extra moments beside him rubbing his tummy and thinks about the years they’ve had. She is not the same woman who cuddled a brindle pup near a whelping pad at the breeder’s home: she has lived through the bliss of her babies’ birth and the heartache of a failed marriage; moved across the country and started her life completely over, watching her fortunes rise and tumble; lost old friends and found new ones; helped her children grow into young vibrant human beings; and even found a new love.

And every day he has been there, the big-eared smiley-faced dog, wanting nothing more than her presence and a good meal and the occasional cookie. The thought of losing him lies dormant now in her mind. She knows it is coming, but she's waiting until the very last moment before she must face it. For now, he is comfortable. For now, she wants only to remember what a good dog he has been. So she writes about him now, because she doesn’t want to write after he’s gone.

And he is there, snoozing across the room, one stumpy foot twitching as he chases squirrels in dream land, one giant bat ear to the ceiling. There's an old Irish proverb that says “a dog owns nothing, yet is seldom dissatisfied.”

He owns one thing and always will. He owns my heart completely. I will love you forever, Nathan Junior, the best dog ever. 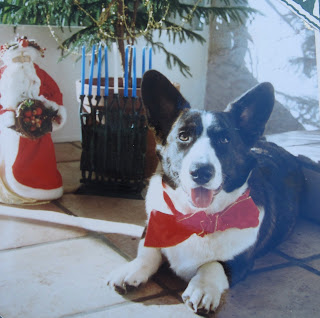 Cornerstone's Nathan Junior, eight months old, was the star of our Christmas card in 1996.
You can see why I was so crazy about him. Look at that smile! Look at those mitts!