What Christmas Is All About

My husband works for a pretty awesome company. Panda Restaurant Group does a lot of charitable work, both locally and throughout the country. They are big fans of Stephen R. Covey's "Seven Habits of Highly Effective People", and have monthly seminars to encourage the personal growth of their employees.

Covey has a "Seven Habits" program targeted at children. Without going into details (because there are lots of details), kids learn self-esteem and empowerment skills to lay a foundation for success in school and later in the real world. Panda has sponsored this program in a number of inner-city schools, and on Thursday, December 10th, they held a Christmas party for the neediest kids from these schools.

Dan was Santa last year. (I found it a little amusing that a disaffected agnostic Jew was playing Santa... but I digress.) He's a jolly fellow most of the time and therefore eminently qualified for the job. As the party approached, Dan asked me if I would be his Mrs. Claus.

Now, if any of you know me, you may know that my dad is, in fact, Santa. By that I mean he plays one at Christmas. He's a stout fellow with a booming voice and a real white beard, the friendliest Santa you'd ever want to meet. My mom, in the past few years, has been his Mrs. at some of his appearances. With her glasses and silver-streaked hair, she is his perfect foil (as she has been for forty-eight years now). So the irony was not lost on me. I could not think of one earthly reason to say no.

Someone rustled up an elaborate Mrs. Claus costume for me, a long red velvet gown with faux-fur trim. I bought a wig at Party City and headed off for my debut.

Panda's huge dining and events room was packed with round banquet tables, full of elementary school kids and their teachers. A group of enthusiastic employees led them in a holiday singalong, and then it was our big moment. Dan -- I mean, Santa -- and I entered the room waving and smiling, saying hello to as many children as possible on our way to the stage.

Dan did his Santa bit, congratulating the kids on their Seven Habits work. Then he said, "I need some help bringing my helpers in!" and led them in a cheer, ending in Abracadabra, and the doors opened.

A group of Panda employees had each sponsored one child, and they streamed in with all the gifts as boisterous holiday music played. Some wheeled in shiny new bikes adorned with giant bows, and that's when I choked up a little.

Dan explained that the teachers and faculty in these schools had identified the neediest kids, and for many of them, this was going to be their only Christmas gift.

You know, I think I'm usually a pretty good writer, but I can't fully explain what I felt at that moment. I thought the kids would be jumping up and down and screaming with joy. Instead, as I walked through the room with my Santa, I realized that these kids were just stunned. I'm sure they had never been to a party like this, in an immense building with a waterfall inside, a 15-foot-tall Christmas tree in the lobby, and all the Orange Chicken they could eat. They opened their gifts with their mouths hanging open, slowly, as if it wasn't really happening.

One lovely little thing held onto a new bike and pushed it slowly past the crowd, all the time gazing at us with her huge brown eyes. She wasn't even smiling; her expression was more a kind of amazed disbelief. I was spellbound.

I bent down to speak to her. "Do you like your bike?"

All she could do was nod. I said, "You've been a very good girl this year."

And then she smiled the most beautiful smile I've ever seen.

I'm going to try not to think about what kind of life she returned to. I'm going to hope that she has enough to eat and that her parents are kind to her. I'm going to pray that, in spite of her tender age, she will remember the seventh habit, "sharpening the saw": preserving and enhancing the greatest asset she has - herself.

I'm going to remember this sweet, nameless little girl all my days, and I'm definitely coming back as Mrs. Claus for as long as they want me. It was my best present ever. 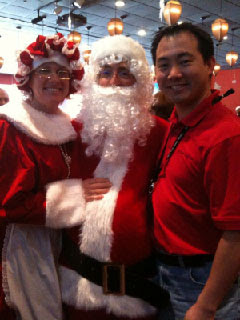 Posted by Leanne Levine at 9:44 AM