Thunder only happens when it's raining... 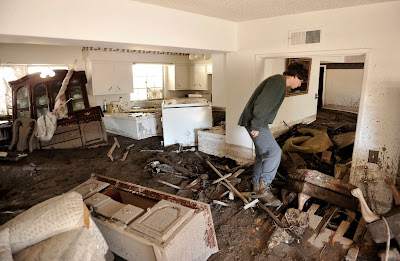 The mudslides destroyed this home in La Cañada Flintridge. (photo, Glendale News-Press)
The sudden rumbling took me by surprise. I peered out of my car's front window, squinted through the rain, and said out loud, "is that thunder?"

See, we don't get many thunderstorms in Southern California. When I lived in Orlando, thunderstorms were almost a daily occurrence during the summer, and I loved to sit on my back porch and watch them. Spectacular events, they were: sonic booms that would rattle the windows, jagged shocks of lightning, and thunder cracks so dramatic that you'd swear a tree just landed in front of you. But here, the thunder is more sedate. Plus, you have to worry that it might be something else, like an earthquake or a mudslide.

So I had to double check the thunder. And it makes me think (although this is certainly not a scientifically proven fact) that this new rainstorm is going to wreak even more havoc.

You see, four days ago, Mother Nature caught us all offguard. The initial rains a couple of weeks ago had those of us in "the burn areas" prepared for the worst, and the worst never came. So when another rain was predicted for overnight Friday, everyone figured it would be no big deal.

For a number of homeowners about two miles from me, the worst case scenario came true. Rivers of mud, sidetracked by a boulder the size of a Volkswagen blocking the catch basin, barreled down their street and into their homes. Several homes were destroyed, many others suffered extensive damage. Cars left parked on the street were swept downhill and into the cement k-rails, which were no match for the mud. In some cases it flowed as high as the running boards of big SUVs.

It happened so fast and so unexpectedly; and unfortunately for the TV stations it was news on a Saturday morning. They scrambled to get reporters to the site, but only ABC-7 had the freedom in their programming to devote the whole afternoon to the story. And you know what that means.

I was glued to my television.

Later, I was able to pull myself away from the interviews with distraught homeowners and geological experts, and my stepson Sam and I went to the grocery store for Super Bowl supplies. The cel phone rang in the produce section; it was my Dad calling from Florida. "We're fine, no mud where we are," I said by way of answering the phone, and he laughed. Five minutes later I got a text from a friend up in Newhall, making sure we were okay. Sam, who lives out in Ventura County, didn't know what to think of it all, so I drove him up my street to show him the barren hillsides and to see if there was any damage there.

Where the fire devoured the earth, skeletons of trees reach up like claws from the dirt. "Dave should come up here and take pictures of this," I said, referring to Sam's brother, an accomplished photographer who is especially gifted at shooting landscapes. The rain had pushed some decent sized rocks and a bit of mud into the streets, but nothing newsworthy. We drove back down through a residential street, where an L.A. County Sheriff's car was parked across the road. The deputy motioned for me to roll my window down.

"We just need to let you know, if you leave this area, you won't be allowed back in. We're starting evacuations," she said politely.

I nodded and said, "that's okay, thanks," and we headed back home to make dinner.

Now it's Tuesday, and a new storm is rolling in. They're saying another two inches of rain could fall. And the evacuation orders, issued last night, went into effect at ten this morning. It's raining steadily outside; I have to pick my girls up from school in about an hour, and we're going to have popcorn and hot chocolate. I'll probably get on Facebook and compare notes with my friends back East who are dealing with the massive snowfall.

I'll be listening for more thunder and of course watching ABC-7. Sorry girls, you'll have to watch the TV in your own room. Mother Nature demands my attention.
Posted by Leanne Levine at 1:28 PM