Dog Show, Part 2: Not What I Expected

Being at a dog show is not all that different from watching one on TV or watching “Best of Show”. Except that it’s real. Seriously: there are the giant puffy English Sheepdogs parading to the show ring. There are the severe women in suits and flats holding dog treats in their mouths. There are Border Collies running agility right in front of you. I don’t know, maybe I didn’t really believe dogs could do all that weaving and jumping, like it was CGI or something. In person it’s unbelievable, but you know it’s not a digital effect.
There were vendor booths set up around the perimeter of the place, hawking goods that only crazy dog people would buy. When I saw an exercise ball for dogs I knew I was in another world. “It can be used by our four-legged friends for core strengthening, increased range of motion and flexibility, neuromuscular facilitation, sensory and perceptual stimulation, joint alignment, and balance control.” I shit you not.
Doggy treadmills, for those days you just can’t drag yourself outside. Handcrafted sterling silver jewelry: what self-respecting breeder could resist a giant brooch showing two Great Danes in profile?
“We’ve been specializing in Danes for over forty years,” the jewelry guy told me. Awesome.
Huge tapestries of YOUR BREED HERE only 250 dollars. Or maybe a purse with YOUR BREED on it. Grooming tools: coat rakes, clippers, $200 shears.  Sanitary pads for your “bitch in heat”: look it up, it’s a serious term. Dog people throw the word “bitch” around no problem, like nobody uses the word to describe anything other than a female dog ready for breeding.
Dan and I said goodbye to our Cardigan breeder friend and wandered over to the booth for the Cardigan Welsh Corgis. Every breed had a booth, and on Sunday morning there were dogs at every one. The Best in Group judging was taking place a little later and the crowds were thickening.
At the Cardi booth, the three ladies volunteering there had four beautiful dogs (okay, maybe some were bitches, but I wasn’t going there) and lots of admirers. Cardis are the kind of dogs that make people go “Awwwww, look how cute!”  So I was busy being one of those people while Dan started chatting with one of the ladies. He told her about Nathan, and me, and how much I love the breed.
“Here’s my Nathan,” I said, pulling some photos out of my bag.
She clucked over him (“such a beautiful brindle boy!”) and said she was sorry, they are never with us long enough.
“I’m Sherilyn,” she said. “I’m the head of the Cardigan Rescue here in California. You know, we have a beautiful 2-year-old boy who needs a home…”
She pointed to a photo of a tri-colored dog with a wistful face and great big ears. The caption underneath said “Bowie 2 years Good w/other dogs”.
Dan heard the word “rescue” and his face lit up. Sherilyn had her prey in her sights. The fish was on the hook. Time to reel him in.

“We found him up in Atascadero, running around with an old black lab. No tags, no microchip. And he’s still got his dewclaws. Most breeders remove those early on, so we didn’t think he was from anybody we know. Nobody claimed him.”
Dan nodded excitedly and I scowled at him. Too late. Hook in mouth.
“He’s a wonderful dog,” she continued. “So sweet. He’s with a foster family up in Lompoc now.” 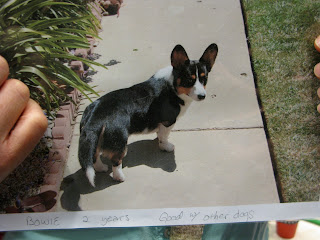 By now Dan was holding the picture. “Is he good with kids?”
I started to hiss at him under my breath. “Don’t do this. Don’t.”
“Oh, he loves kids. And he’s great with other dogs. He really needs to be with a family with kids.”
“We’ve got three! And a little dog who’s been very lonely since Nathan died.”
Sherilyn reached for a clipboard with a xeroxed form on it. It was the application to adopt. She handed it to Dan.
“Hold on there, cowboy.” I placed myself between the two of them. (“Excuse me just a moment, will you please?” I murmured politely over my shoulder to Sherilyn.)
“What?” Mr. Wide-Eyed-Innocent-It’s Just-A-Piece-Of-Paper asked.
“IT”S TOO SOON!” I said. “It’s only been a month. It’s too soon.” And besides, I have my heart set on a puppy, I didn’t say. Puppy puppy puppy.
Sherilyn piped up behind me, driving the sale home. “I’m telling you, Bowie is a special boy. Probably the sweetest dog I’ve ever rescued. A real lover.”
I squinched my face at Dan and whispered, “Don’t do this. Do not. I hate you for doing this.”
But I was outnumbered.
He’s already housebroken, they said.
He’s neutered, chipped and has all his shots.
He’s socialized to kids and other dogs.
Yes, he’s a beauty.
Yes, he’s definitely a purebred Cardigan.
Yes, he’s a fantastic dog, but Melissa (the foster mom) already has three Corgis and a female she wants to breed.
Also, the adoption fee is about one-third the cost of a new puppy.
No training. No pee and poop in the house. No frayed nerves over hyper Claire being too crazy with a little pup. No AKC fees.
Plus – and this is big –
He’s a rescue.
Dan is all about rescue dogs, and I’m all about Cardigans.
We both get what we want.
The next weekend we brought him home. He was perfect, even his name. We’d been talking about a rock star name for the next dog: Joe Strummer, maybe, or Chrissie Hynde if it was a girl. Charlie lit up when we told him it was Bowie. He loves Ziggy Stardust.
In about 15 minutes he owned the place and won Clementine over. The kids didn’t faze him at all. He has a look in his eyes that’s part wisdom and part mischief, and when they got to be too much he just walked away. Smart. Except when it came to using the dog door; that mystified him. How does that other dog walk through that wall? I don’t get it.
That night, I put his bed on the floor next to ours. “Here ya go, Bo,” I said, patting the cushy part.
He looked at me, tilted his head, and then somehow with his stubby Corgi legs he leapt up onto our bed and curled up next to Dan.
“No, no,” I said. A dog in the bed? Never. No way. That’s why we had a tall bed anyway. Plus Dan hated it when the cat (rest her soul) had slept up there. (“There’s cat hair on my pillow!”) I picked Bowie up and set him on the floor.
Pulling a sleeping bag over to the side of the bed, I said, “Here you go. I’ll sleep with you down here tonight.” I patted the pillows. "Come on, Bo!"
He looked at me, tilted his head, and then used my reclining body as a step to jump back up on the bed. This time, he turned around and peered at me down on the floor, his tongue hanging out, smiling.
And now we need a bigger bed.